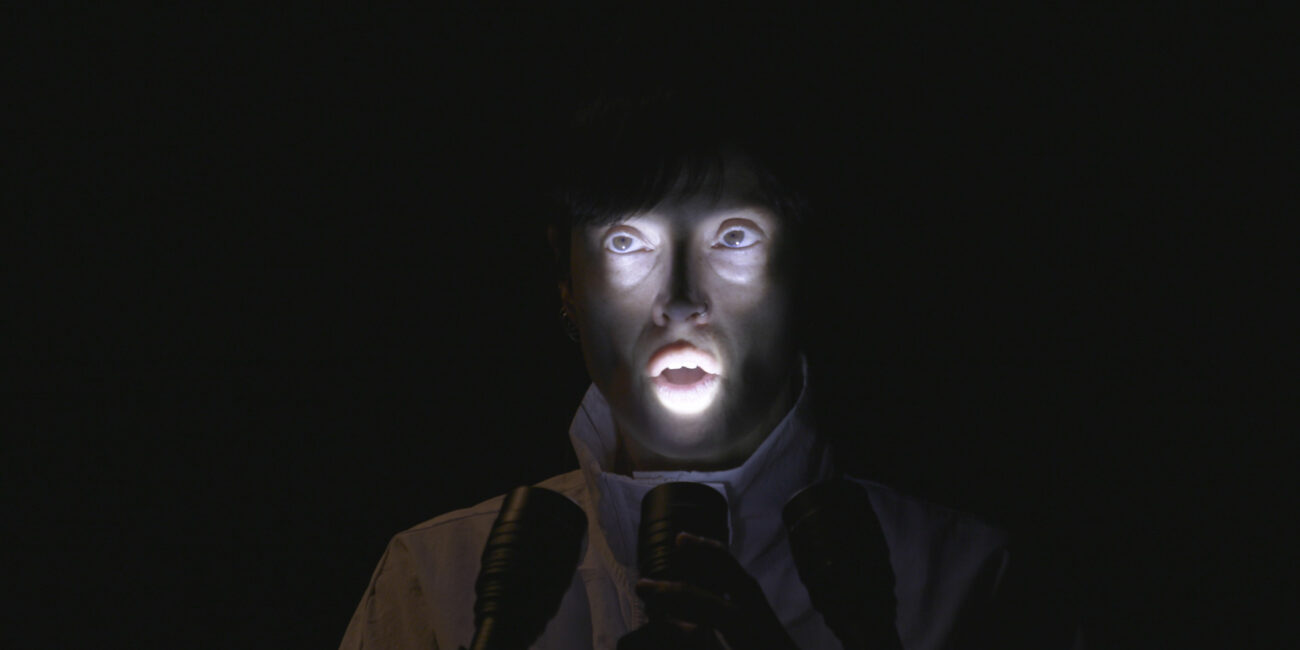 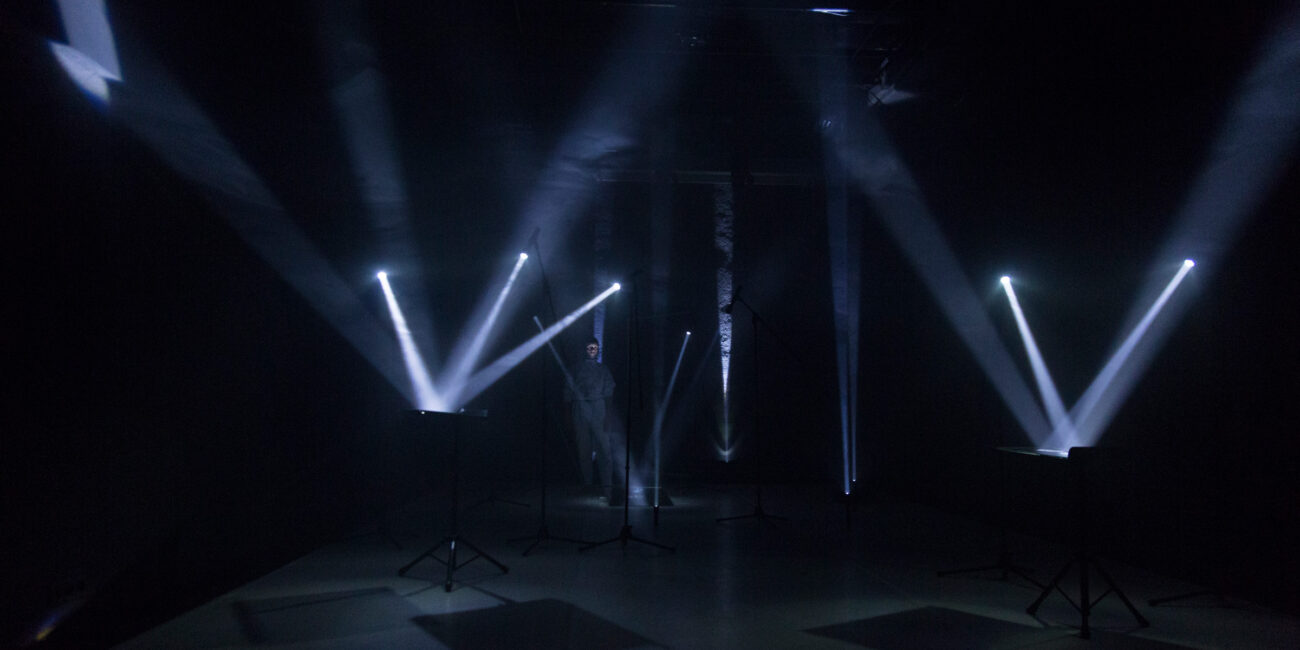 The Watching Machine was the name given to those 19th century objects that created illusions through mirrors and shutters. In the piece The Watching Machine “the machine” is the stage box itself. In it we play with light, shadows and reflections to experience what is illusion, what is representation and what is theatrical convention. A piece composed of small installations where light and shadows are fictionalized through optical illusions.

“Drac d’or” award for the most innovative work at the Lleida Puppet Fair. 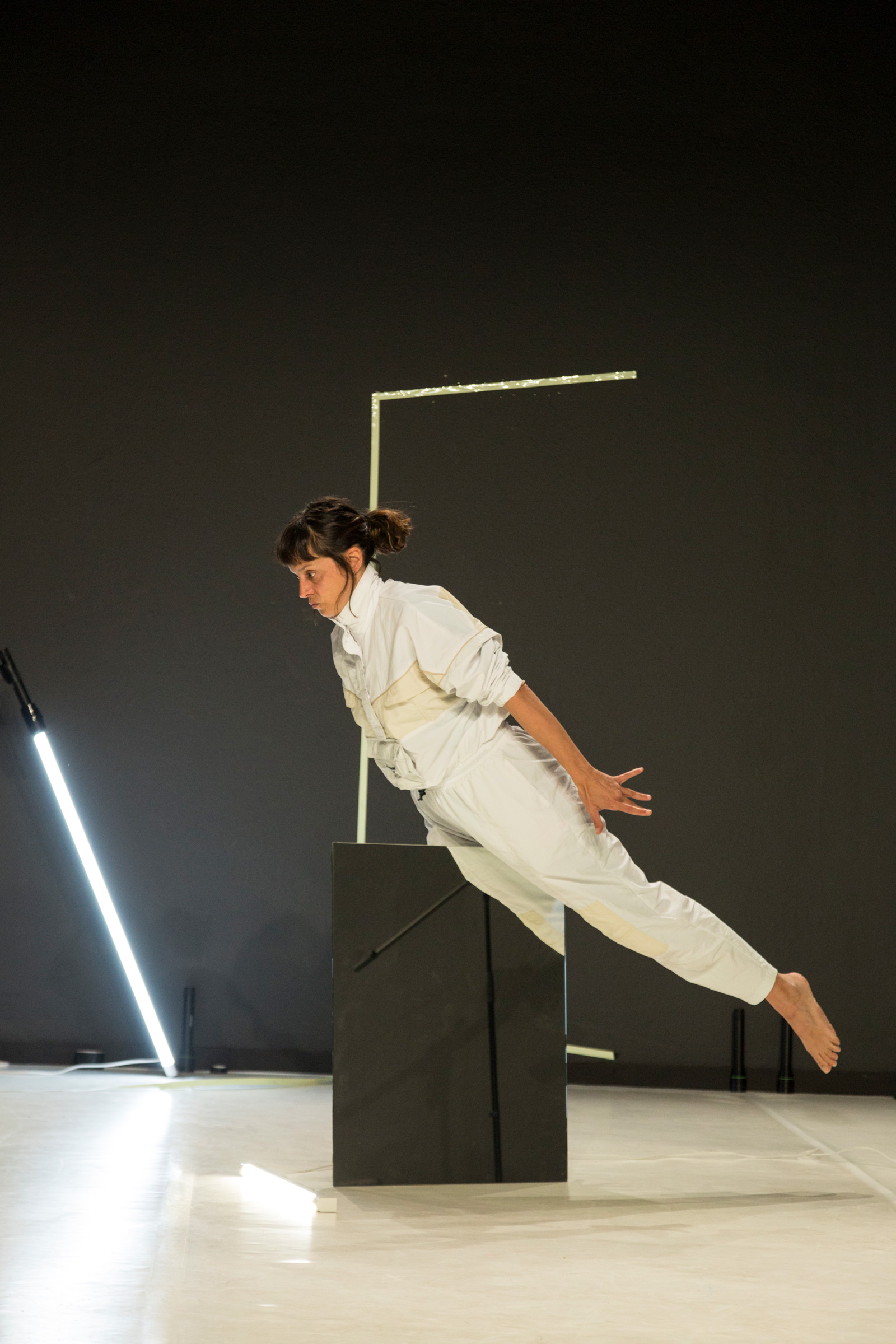 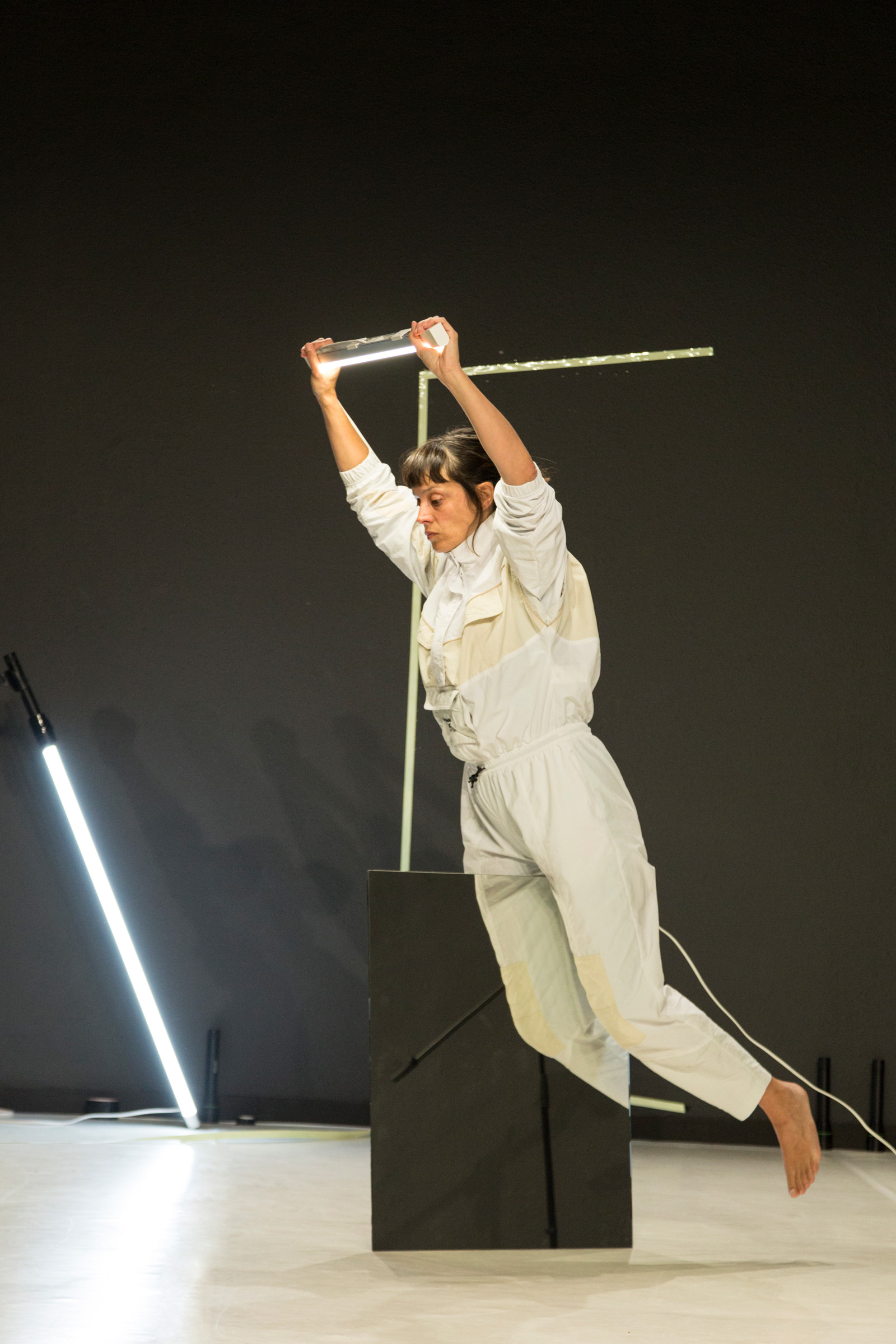 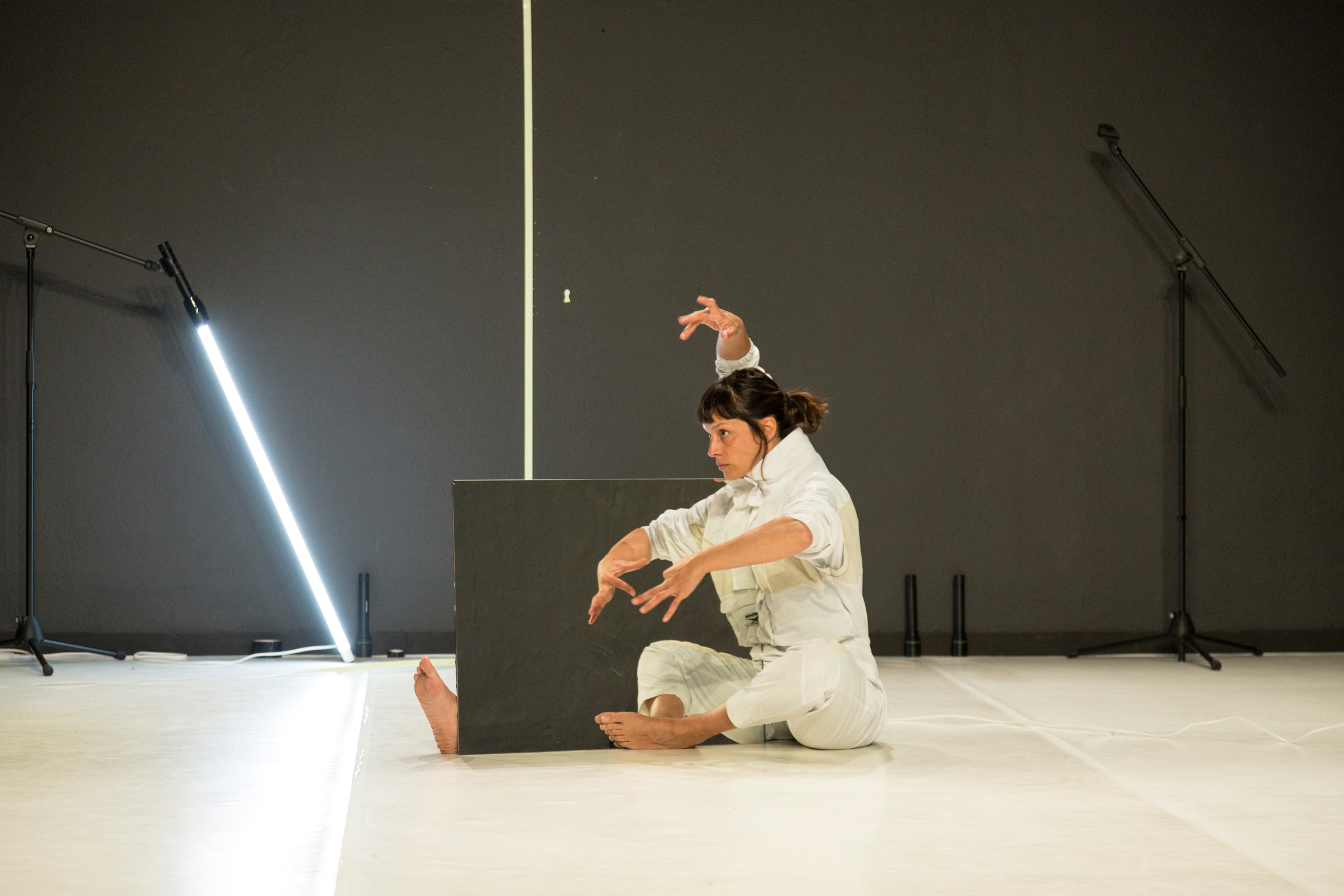 The innocence of the look.

In our time of electronic invasion, virtual reality and the triumph of the accessory, Macarena Recuerda Shepherd turns its gaze back to recreate the future. Like an ingenious Georges Méliès returning to the essence of illusion and contraption, the performative artist updates the ‘watching machines’ conceived centuries ago.

The 19th century public was an avid consumer of visual tricks. Deforming mirrors, projections on painted plates, Chinese shadows, smoke effects, shrill sounds and various phantasmagorias delighted a spectator who entered, without being aware of it, modernity.

The cinema, with its technique of technical reproduction, fixed the representation a dozen decades ago, to create an image that could be spread without limit in time and in the same way that it had been created and conceived in its origin. There was no possibility of variation. The new world of technology forever froze the ghosts of the past and condemned them, or saved them, to live eternally in the public eye.

Macarena Recuerda Shepherd, in her show ‘The Watching Machine’ within the LABOXL festival in San Sebastián, appeals to the innocence of the viewer’s gaze. It invites you to rediscover the virginity of looking when we’ve already seen everything. Also, a million times. And it works. Our capacity for dreaming has no limits, although sometimes it is asleep or lethargic due to the visual accumulation suffered by the omnipresence of the images.

After the installation of the device for dreaming (where the lamps emit sounds and the sounds are illuminated with the performance of the artist), the public is already able to enjoy the five tableaux vivants that make up the piece: profile deformation with tapes, lights that create new figures and various monsters, in the form of disturbing insects, and a luminous finale.

As in ‘2001 space odyssey’, by Stanley Kubrick, the human being already in space, returns to occupy the center of the universe, almost in a mystical way. A central being, brilliant and disconcerting (at the same time as disconcerted). An optimistic and vital piece that, in a heroic gesture, invites us to reconcile with our gaze and enjoy, once more, the illusion.

Macarena Recuerda Shepherd’s play “The watching machine” was presented from 2 to 5 and from 9 to 12 September 2021 at the Antic Teatre of Barcelona. A work that in a certain way continues the exploration carried out in ¡Ay! Ya!, where it sought to provoke the complex perception of double realities: being and not being at the same time something or someone. In other words, resort to the perceptive games of trompe l’oeil but without ever losing sight of the double reality that creates it.

In “The watching machine”, as the title itself indicates, we find ourselves again in the realms of the gaze, with the whole setting turned into a kind of magic box in which the corresponding perceptual mutations of the double gaze take place – things are not what they appear to be, with a clear metamorphic evolutionary line towards an explosion of ‘something new’. A purpose magnificently achieved without leaving the starting frame at any time and with the few elements that come into play: a forest of mic stands with its microphones, four mirrors and rays of light that also play at unfolding.

To achieve this transformation of the space and the visible, the artist, who on this occasion acts alone (with a technician helping from the mix), needs to create a perfect atmosphere of what we could call a performative ritual, that is, an exact measurement and always self-conscious of the time and the times of each action, this spatial and temporal self-awareness being the subtle, but profound and powerful secret that introduces us to the mystery of the rite, of double looks and transformation.

As in every ritual, there is a studied ‘staging’ of the spatial elements that will make it up, in this case, the forest of microphone stands that flood the stage, all stretched to the maximum and looking upwards, as if wanting to capture sounds and messages that come from heaven, from the cosmos.

At a given moment, Macarena Recuerda allows herself some sequences of direct connection with the audience, when she plays to deceive the perception we have of her unfolded in a mirror; As someone who puts the cards on the table, she seems to tell us that the key to the matter is the ambiguity of the visual duplication. She also tells us that the basis of her entire proposal is based on the mirror and its reflective capacity: it splits the image and breaks the light.

But it is still a hint that is also misleading, because the ritual in which we are immersed goes beyond the game of being two things at once. As I said before, the Málaga-Basque-Catalan artist, master as she is, of double languages that demand a conscious perception of them, embarks on a distortion that is transformative of space and time. Ritual is real because it changes reality and introduces us to something new and different.

The sound is used for this: through a deep beat that grows and becomes clothed with layers of music that refer us to the ‘transfigurative’ song that already sang to us at the beginning, then even from the initial nakedness of the play in scene of the rite. It’s Because, the well-known Beatles song. Now the song emerges immersed in a ‘cosmic’ expansion, as if the supposed microphones will finally capture the vibrations of those sought-after sounds, in accordance in a certain way with the lyrics of the song.

A wave of light and music spins the process of transformation of the space and of the actress-attendant herself, turned herself into a focus of expansion of infinite rays of light that arise from the broken unfolding of the light beams reflected in the mirrors… An almost ending of mystical or cosmic expansion.

I think that Lídia Zoilo, real name of the artist who presents herself as Macarena Recuerda Shepherd, has achieved the most difficult thing yet, from the utmost simplicity and without ever losing the perceptual ambiguity that defines her work. Achieving an effective rite of visual and sound transformation, without getting lost in the emotional confusions that are usually used for these needs, but always keeping the eye of a self-conscious perception awake, that is, being inside and being outside at the same time, is not something that is seen every day. It is a unique experience, which reminds us of what could be a theater of the future that goes beyond the usual content with its waves of emotional games, and that focuses on the mysteries of the conscious perception of time.

On a white stage closed by black walls, only open to the public, the impeccably dressed artist in a white jumpsuit is placing standing microphones. She place them harmoniously scattered across the white stage. On the back wall, black, she place ssome white adhesive tapes. When the light goes out, a door opens in the wall. It is the first and surprising optical illusions of the show.

Macarena Recuerda, alter ego of the artist Lidia Zoilo, leads us slowly through a fascinating world of optical illusions, of visual deceptions full of magic and poetry. Her masterful play, reflected in a mirror held between his legs, is a real delight, greeted by continuous laughter, especially from two girls in the audience. As if it were an astronaut in outer space between the mists and a faint light, the artist takes us into a hypnotic sound-visual-choreographic universe composed of beams of light, which will end up filling the entire performing space.

“The Watching Machine” is a beautiful, funny, stimulating, relaxing, fascinating and hypnotic spectacle of visual theater that someone defined as Performative Illusionism, it could also be said audio- visual lighting research. In any case, an indefinable visual game of bodies, lights, shadows, mirrors and reflections, of unquestionable plastic and poetic beauty.

A performing arts researcher with much talent.

No posts were found for provided query parameters.